PONDEROSA NO. 62 IN NZB MAGAZINE

BRW’s Ponderosa Fire Station No. 62 has a cameo appearance in the current issue of NZB magazine.  Click here to read about the Fiber Cement siding that is used on its exterior. 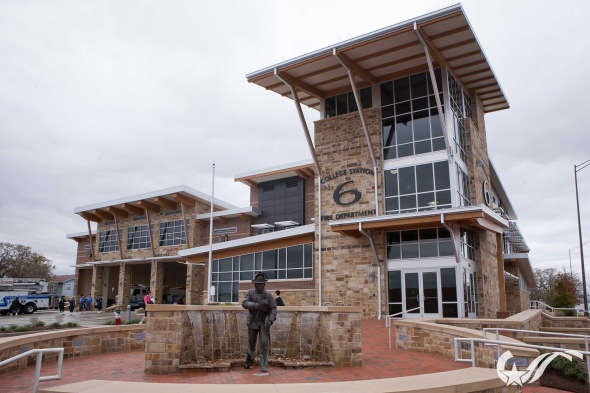 The Right Materials are Key to Hurricane-Resistant Fire Stations

Firehouses occupy a unique place in our communities–a haven of safety and preparedness, even when disaster strikes. That’s why ensuring that fire stations can withstand common natural disasters is a vital issue for architects.

In parts of Texas, that means constructing firehouses to withstand hurricane-force winds. While no building can be designed to be “hurricane-proof,” they can be constructed to resist a hurricane with only minimal damage.

To that end, Brown Reynolds Watford Architects teamed up with the Texas A&M University colleges of Engineering and Architecture to develop new methods and technologies to build fire stations that can resist hurricane-force winds. We also adopted the Miami/Dade County Building Code, the most stringent of all hurricane codes, and made it effective for all projects designed in hurricane-prone areas.

The challenge, of course, is to build a hurricane-resistant building while staying within budget. In the past, designing a building to resist hurricane winds has added as much as 40 percent to the overall building cost, and some of these buildings still suffered major damage in a hurricane. The City of Victoria Fire Station #4 is one example of our achieving these goals through research and innovative construction methods.

Although concrete has traditionally been used to resist hurricane winds, the cost can be prohibitive and the appearance can look cold and unwelcoming. In Victoria, the use of concrete was limited to the apparatus bays, where reinforced concrete block was skinned in stone to give protection against projectiles hitting the walls, as well as giving it a more attractive appearance.

Steel is more cost effective than concrete, but in our analysis of other buildings, we found that the skins of metal buildings using panels were either not attached correctly or the gauge of the metal was not thick enough. In the aftermath of hurricanes Katrina and Rita, hundreds of metal buildings had their skin peeled off from the force of the winds, leaving their remaining steel structure exposed.

Rather than using the steel as a cladding material, BRW limited its use in Victoria to framing doors, large openings, and other architectural features such as the training tower. The apparatus bays are also equipped with steel roll-down doors that are installed in front of the everyday glass folding doors. These doors are only used in the event of a hurricane, limiting the negative aesthetic effects they might cause.

Although it seemed the least likely of the three materials, we found that wood construction can be the best in cost as well as one of the strongest in resisting wind loads. Also, the development of new technology, development of straps and fasteners, and the availability of wood gave it an advantage. The living quarters in the Victoria #4 station consist of 2” x 6” wood framing with metal straps at each stud that wrap over the top and bottom plates of all exterior walls. They also include three interior walls, in order to anchor the roof while experiencing uplift wind loads during a hurricane.

The fasteners are placed at very specific locations, which were carefully inspected during construction to ensure the construction documents were followed. The windows in the living quarters are each equipped with a hurricane panel, which is both cost effective and architecturally successful, as it is removable and only used in the event of a hurricane.

As architects, it is not only our responsibility to design captivating buildings to enhance the character of a neighborhood, but also to design safe structures that will withstand the effects of natural disasters.

WHY ARE FIRE TRUCKS RED?

Why are fire trucks red?  One of the most widely cited explanations dates back to the 1850’s, stemming from a long standing competition between the fire brigades. The idea was that the rig could stand out by being the cleanest, having the most brass, and being the noble color red.  Red was the chosen color for the pumpers because it was the most expensive at the time.  In addition, red is a color that stands out and is easily recognized on the street.  Although there are a many available choices for fire vehicles today, there is no more instantly recognized fire engine color than red.